It’s now the end of our first week of living out of the van while travelling New South Wales, and we wanted to sit down and reflect on some of the things we’ve learnt over the last 7 days.

Even though we have a lot of experience with van life, being on the move and actually finding our feet living in a campervan again has been exciting, and also challenging.

This time is very different compared to when we lived in our van in Canada a decade ago, or all the rentals we’ve picked up around the world.

First of all, Marlee is now our full-time home. We’re also having to approach this lifestyle differently, as we run an online business and can’t just disconnect from society the way we used to.

It’s still early days, but already we’re starting to discover things about ourselves, our new life and the van that we need to think about.

So without further ado, here’s 5 things we’ve learnt from one week of van life!

We Wish We Had Bikes

We actually ordered a bike rack before we hit the road, but it never made it in time, so we started travelling without any other form of transport besides the van (and a Boosted Board).

To be honest though we thought it wouldn’t be a big deal, as we figured the only time we’d use the bikes is if we’re parked out of town and were looking to peddle in somewhere without moving the van.

The reality has turned out to be the opposite though, and we honestly would have used them every single day.

We’ve been parking up at a mix of free campsites and paid caravan parks, and while moving the van really isn’t that big of a hassle, if we had the option of jumping on some bicycles we 100% would do that instead.

In addition, we’ve been following the stunning South Coast of New South Wales, and there are miles and miles of bike paths that weave around epic beaches and jagged peninsulas.

As soon as we drive back through Sydney we are definitely installing a bike rack and buying two mountain bikes.

It’s Hard to Find a Routine

As we run a business that allows us to work from anywhere in the world, we need to spend a few hours on our laptops most days to keep on top of things.

We also love to exercise, stretch and meditate, and we’ve built up a pretty decent routine over the last few years of combining everything alongside our travels and photography.

All of that has gone out the door though as soon as we hit the road.

We thought we’d be pros at it, seeing as we’ve literally been doing it full-time since 2014 in some crazy remote places. But throw us in a van? Turns out we’re not so good at time management…

We are really struggling to find a routine that works for us while living out of the van, as every day is so different.

Some mornings we get up well before sunrise to go out photographing, then quickly make breakfast and coffee before going out exploring.

During the day we’re sightseeing, and at night we’re cooking dinner and having early nights. When the sun goes down and the temperatures drop, we usually end up passing out before 10pm.

Other days we’re catching up with friends, or meeting new people and having a few beers or hanging out, and time of course gets away from us.

As a result we’ve done almost zero exercise besides hiking, and we’ve fallen pretty far behind on our work.

To be honest though we don’t have anyone to blame but ourselves. So that’s one thing we’re going to strive to improve over the next few weeks is finding that happy balance between work, health, travel and van life.

We’re not dirty people at all. We’re pretty clean really, and Alesha in particular hates dirt, mess and clutter, so things are pretty well organised in the van.

But holy damn, it gets dirty quick!

By far the most used item in the van has been our broom. Even with a mat outside the door, a coarse brush mat in the doorstep and a mat inside, plus our policy of no shoes inside the van, we are constantly sweeping out dirt, sand, grass and dust. How the hell it gets in there we have no idea.

Also living in a small space means items are always strewn about. Especially being photographers and working online, we have cables, batteries, accessories and other things scattered everywhere.

We’re always putting things away, but then an hour later there’s more stuff taking up the benchspace and next to us on the couches.

That has had a surprising effect in that when we go to drive off in the van somewhere, we usually end up spending 5-10 minutes putting things away to make sure everything is secure.

We don’t think there’s much we can do to change this, other than keep on top of cleaning and keeping things tidy.

Ok, we already knew this based on our previous 12 years travelling the world, but after a week of driving we honestly thought we’d be a bit further than 200km from home.

We spent our first night in Cronulla after catching up with a bunch of friends, and then drove south to the gorgeous town of Kiama.

We only planned to stay there for 2 nights. But sure enough we fell in love with the place and extended it to 5 nights.

In all honesty we could have stayed longer, but decided to get on the road before we became permanent residents.

Then we got to Jervis Bay and decided to spend just 3 days here before driving on again. Yep, you guessed it – we just extended our stay to 6 days, and might extend it beyond that again.

The truth is we hate to rush things, and when there are so many beautiful places to visit, we don’t want to feel like we’re cramming in a million things into a single day.

Add on that we’re trying to run the business as well and we just can’t go much faster.

A drive day, even if it’s a short distance, will easily eat up a whole day by the time we stop off for sightseeing, pictures, food, taking random backroads, and then getting to a new town, finding a place to stay, going for a walk to see where everything is, etc.

At this rate we have no idea how far south we’ll get, where we’re going to be next week or what we’ll be doing, but the best thing is that we don’t have a deadline to meet.

It’s nice having the freedom and ability to just take things slow, and we’re going to keep on doing just that.

People are Super Curious About the Van

Whenever we park up somewhere, people gravitate towards the van. Locals and travellers are genuinely curious about it, and want to know more about this lifestyle.

There’s always tonnes of questions, and of course people would like to see what it’s like inside, which we always happily oblige.

In fact as I’m writing this now, we’re parked up with the doors open overlooking a bike path in Jervis Bay. 80% of people who walk past stare at the van, and start talking about it.

“Oh look, they have a herb garden!”

“See honey, we could do that!”

“Oh my gosh that’s my dream right there!”

“Excuse me, is this yours or did you rent it?”

We don’t mind at all, and in fact we love introducing people to Marlee. So if you see us parked up somewhere (we’re easy to spot with the NOMADasaurus and Kathmandu logos), come say hi!

There’s a bunch of other things we’ve learnt his week, but we can save that for another future post.

We’re so excited to finally be on the road again and living out of Marlee, and can’t wait to see how things pan out and where we end up.

If you’re new to the journey, make sure you follow us on our new Van Life Theory Instagram account to see where we’re at in real time and get some behind-the-scenes insight into our new #VanLife trip around Australia. 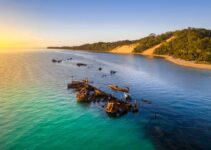 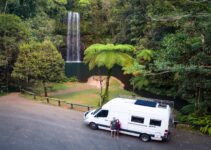 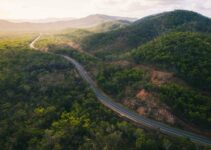 Hi, we're Alesha and Jarryd, the full-time van lifers and co-founders of this website. We've been travelling the world together since 2008, and now are exploring Australia in our campervan, Marlee. Want to know more about our story?